Brain Hemorrhage can be detected in the Ambulance

The Brain Hemorrhage Early Diagnosis and Imaging System (KASK) for Ambulances, developed with the support of Istanbul Development Agency (IDA), was introduced.

Thanks to the project developed by the Department of Electronics and Communication Engineering of Istanbul Technical University, the brain damage caused by accident, stroke and vascular occlusion can be detected in the ambulance.

Two prototype devices, which are developed within the project supported by Innovative and Creative Istanbul Grants Program 2016 of Istanbul Development Agency, were introduced with the ceremony held at ITU Ayazağa Campus Electrical and Electronics Faculty Ömer Korzay Conference Hall.

Speaking at the ceremony, ıSTKA Secretary General Özgül Özkan Yavuz emphasized that they attach special importance to the development of domestic technologies in the health sector. "We support the development of indigenous medical devices and medical products that have a critical role in the diagnosis and treatment of diseases, and we are trying to encourage our university which works on it". Özgül Özkan Yavuz, who stated that ITU's KASK project was supported to increase the quality of life in Istanbul and to have innovative services in urban services. She pointed out; “KASK is one of the projects with the highest budget. Total budget is 1.5 million Turkish Lira. We were able to support ninety percent of this amount.”

Head of ITU Faculty of Electrical and Electronic Engineering Department of Electronics and Communication Engineering Dr. Abraham Akduman also gave information about the project to the invited guests.

Akduman said that the KASK was designed in ITU, the prototype was produced and the tests were completed successfully. "During the post-traumatic period, mobile detects in the ambulance whether the symptom in the patient's brain is ischemic or hemorrhagic, monitor the condition of the patient continuously because it displays the bleeding, allow starting the correct treatment in a short time, and do not contain ionized radiation. Two prototypes have been developed and patent application studies are about to be completed. The tests on the phantoms have been successfully completed. In order to start the clinical tests, the application was made to the Ministry of Health, General Directorate of Medicine and Medical Devices” he expressed. 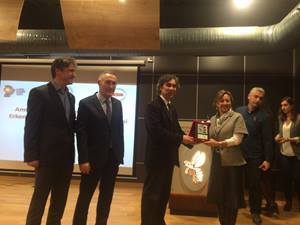 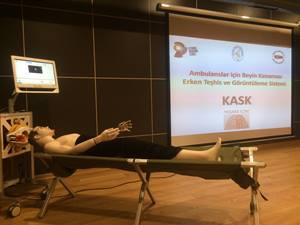